My Myvi Odometer After A Year.

May 12, 2010
It has been a year since i've been using my own car which is paid with my own money to drive all around town. Though, to tell you guys the truth, i use my car mainly for driving from home to work only. It is only occasionally that i would use it to go out with friends and families.


Not whole lot happened with me and my car since then, with the only biggest disappointment about it was when, i pray to god that they'll be DAMNED, some motherfucker-god-knows-who, stole my foglamps. i have yet to replace the stolen parts with new ones though. As i am not definitively decided whether to buy two brand new foglamps to fill in the hideous gaping hole on my bumper OR just replace the whole front bumper with new one, albeit with another styling or design.
Which is where i would like to lead you guys my "imaginary readers" to my actual topic, where i am throwing a simple question to you guys. After a year, guess what is the mileage of my car right now?


These are the clues (in which they never help):
So now, guess how may kilometers that i have driven?

i have only driven it, to date: 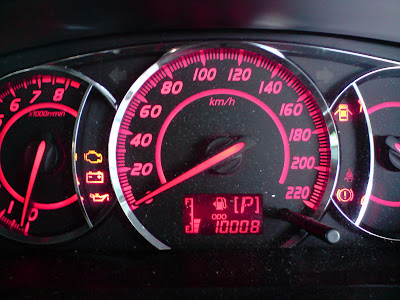 Two of my colleagues who bought their car in the same year that i bought mine have already reached like 50 thousand kilometers.

i was like, "guys, your car will surely fell apart way earlier when my car is still like brand spanking new,".

A statement that would always yield an almost exact response from the two of them, they would always say, "Damn you!" In which i would always laugh at the both of them at the top of my lungs. Haha..


i am not really a car enthusiast at heart, so i am not really concern into things like buying my car extra accessories, modifications, changing of rims or many other shenanigans that the people nowadays like to do to their cars. As long as my car kept running as it should, then i am content and satisfied. Perhaps i need a cute girlfriend to sit next to me in the future, though that future seems SO BLEAK. Hahahaha..
Anyways, i stumble upon a video on YouTube which makes me rethink about my decision of not adding some sort of accessories.  See it here:

That is one FREAKING COOL lighting accessories. i am definitely getting one for my car. SHUT THE FUCK UP! IT IS NOT LAME! You who dissed Knight Rider should be shot! Hahahahaha.. While we're only sub topic of Knight Rider, lets enjoy the Knight Rider theme song.

It is COOL yo!

P/s: If you're reading this from my Facebook notes. You will not see the freaking awesome videos. Click on VIEW ORIGINAL POST to see it. It is COOL yo!
Car Comedy Cool Pix Jokes Late Night rock out rambling Rumours and News