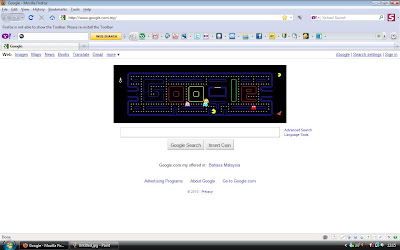 Perhaps you guys have seen it already. Since last Friday, if you guys are using Google religiously like i do, you might have notice that Google have IMHO the most awesome logo ever.

Google changed their usual static pic/logo banner into a PLAYABLE Pac-Man game! Now how awesome is that! However the changes in the Google version is that, the maze spelled "GOOGLE". Well.. Duuuh?!

Here a little history, Pac-Man was introduced on the 22nd May 1982. A highly successful and recognized game due to its appealing nature to both genders, not only to the usual male gamers.

Did you guys know that since Google uploaded the playable Pac-Man banner of a game for commemorating Pac-Man's 30th anniversary, companies all around the world experiences drops in productivity. In which led to some companies to counteract with blocking Google entirely. via Wikipedia.

Now tell me that the Pac-Man game did not leave any impact on our lives, i dare you. Perhaps by the time you're reading this, the playable banner will no longer be online.