One Person You Wouldn't Expect To See At New Moon Premiere: 50 Cent

December 17, 2009
Yes folks, for those who have yet to see this, 50 Cent. 50 Cent is at the Twilight: New Moon premiere. Well, i thought TNM only attract teenage gurls. Lol! 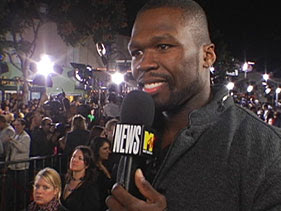 "Well, what exactly is the target demographic?" 50 wondered when asked what he was doing at the "New Moon" red-carpet premiere in Los Angeles on Monday night.

"So, you're calling me a little teenage girl?" the hip-hop star laughed before pretending to plunk Larry on the head with an MTV mic.


Now, that is unexpected isn't it? Hahaha..