November 08, 2009
Couple of weeks ago, i went out to buy myself a new mouse and a pair of earphones because the previous ones i owned died on me. i initially wanted to get the gamer's grade mouse, which is the Razer brand and the high end audiophile grade headphone. Then when i finalized the cost of it all, i decided that i shouldn't use so much money just to get two things.

i was originally fixed on getting a gamer mouse which is the Razer Diamondback 3G, unfortunately the price of one mouse in our Malaysian currency is tad expensive, i could perhaps get 3 or 4 medium range price of computer mouse with that price.

A4 Tech X6-28D Glaser Mouse
After much survey, i decided to go for a A4 Tech mouse. It is a "glaser" technology mouse. A patent pending technology that enables the mouse to work on any type of surface even on transparent surfaces. Which everyone who have tried using traditional laser mouse would know that the common laser mouse would be completely unusable on transparent surfaces especially glass. 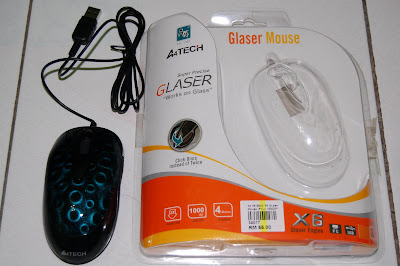 Specs
The mouse has 4 buttons, a scroll wheel, and a 1000dpi laser sensor. The neat thing about it's laser sensor is, it doesn't have the usual red light emitting from it like a traditional laser mouser would. Which i think a lot safer to our eyes than the usual mouse would. On it's side, it has two rubberized grip that would prevent slippage should one were to play games on it for long hours. i think it is a convenient and thoughtful thing to have. 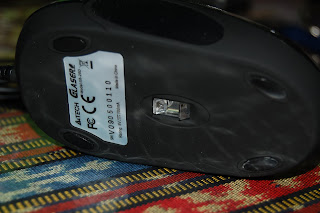 
Usage
i can say that using the mouse on transparent surface is a plus indeed. i would never have to use a mousepad ever again. Although it is not really a gaming mouse but it does the job well. Very well i might add, as using it playing Counter Strike is a joy. The mouse perform very well indeed, far exceed my expectation. i thought it would jerk as a traditional mouse would but it didn't. It felt fast and slick. i didn't have to use specialized gaming mousepad either, only on the surface top of my table.

Unfortunately i can't adjust the sensitivity of the mouse itself so i'm left with the option of adjusting it in the Counter Strike option instead. Now for a RM55($16USD) mouse, with good quality build, excellent sensor and most importantly not expensive. i give it a 4 out of 5 RK ratings.


A4 Tech iSecureFit MK-650 Earphone
Now for the earphone review. Like i previously said, i initially wanted the best of a high end earphone that i could get here in Miri. i've seen a few of them in the Apple store at Bintang Plaza aka Parkson. Then again the fact that one of those would probably cost me an arm and leg, so i abandoned the idea. 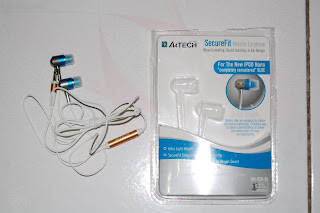 i always like an in ear design earphone, so that narrowed down my options. Blue is my favourite colour, so when i saw a blue coloured in ear earphone, i'm totally sold. The MK-650 in ear earphone is an eye candy, with its white cable and a band of blue colour on the earphone itself. This is probably due to its marketed as a substitute earphone for the new iPod Nano.

Specs
For its specs the earphone has 10mm neodymium magnet, sensitivity of 102dB, frequency response range from 20Hz to 20kHz, and with the impedance of 32omH. What does that specs meant? Honestly, i have no fucking clue. Hahahahaha.. Sorry but i am not a qualified audiophile. Though i am quite critical of how my music have to sound to me.


Being an in ear earphone, it does the sound isolating job somewhat well. In a loud environment, i didn't have to turn the volume up high in order to enjoy my music fix, and in a quiet and calm environment, the earphone is a blast!

It secure and fit nicely in my ear without ever feeling uncomfortable. i have yet to use it while exercising, because frankly i have not been exercising regularly, but i am sure that the earphone would stay put.

The bass was adequate enough for me but probably won't be to much of a liking for bassheads out there. For me it pumps just enough amount of bass, as i don't really need that much of low frequency bass to bang into my brains. The midrange frequency sounded smooth but its treble is somewhat harsh with certain music.

For its clarity, i would say it does a good job if however depends on the encoding of the music you're listening to. If you're listening to a lossless bit encoded music, then you'll enjoy it with this earphone. Instrument separation is excellent. For a music like orchestral and multi layered heavy metal music, the earphone does a great job at defining different instrument that is in the music itself.

i can easily differentiate the sound of instrument played in the music, which is a joy and satisfying to me. As in a heavily layered rock music i can hear the different guitar sound used, the orchestral piece in the background and the vocal of the singer of course.

Now for a price of RM39($12USD), the earphone is cheap. Though do not assumed that cheap meant low quality. For me this is a bargain and a good quality earphone, as long as it sound this good for me and didn't burn a hole in my wallet, i would give it a 4 out 5 RK ratings.
Gadgets Rock Out Gaming rock out rambling Technology