My Weekend Was As Boring As Counting The Stars At Night.

October 12, 2009
My weekends is as boring as usual. On Saturday, i was supposed to wake up early to take my car for its schedule maintenance. Unfortunately i woke up exactly at noon. Although the service centre does open until 3pm in the afternoon, i was already not too keen of going out. So i decided just to sit my freacking ass at home and play games on Facebook instead.

When i got up and went out from my room, my mom asked about the package that had arrived for me. i was like, heck yeah, finally. Actually it was just a diecast model of the car i owned. A miniature model of a Perodua Myvi. 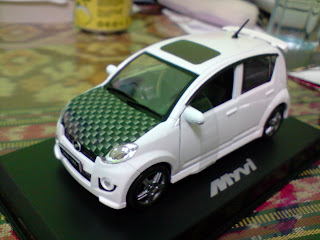 i was close to freacking exited like a little boy got his toy present. Yeah, almost actually. i love the very thing of it. i ordered two model, with one being no extra modification whatsoever and the second unit with added "carbon fibre" hood and a sunroof. As per picture above. Though both unit i ordered are modded with the same plate number as my real car.

How did i stumble upon it? You might asked. Well i never tell, okay, if you're insist. Just type "Perodua Myvi Diecast Model" in Google search box. That should get you guys started.

Anyway, Saturday night, me and my family went out for dinner and i brought along my Ben Q R42 laptop with the intention of adding more RAM. i had prepared some budget to max out my system memory up to 4gb of RAM as permitted for a Vista 32bit OS.

The thing was, i actually thought that a 2gb price of RAM had lessen, but i didn't realize that my laptop is already 3 years old. In tech time, that's perhaps equivalent to the 90's computer. Hahaha. So when we arrived at the computer shop after dinner, i told the computer technician that i wanted to max out my RAM.

i asked for the price, and upon hearing it, i realize that i didn't bring enough money. So i opted for a 2gb RAM instead. Previously i had 1.5gb of RAM, with one stick of 1gb and a stick of 512mb of RAM. So the technician took out 512mb stick and replaced it with the new 2gb stick. It should add up to a 3gb of RAM in my laptop.

He rebooted my laptop, then the unthinkable happened. My home screen flickered and the previous glorious colour degraded. To a 65k colour and 640 x 480 resolution. Clearly a sign of incompatibility of hardware. Perhaps in the moment of panic, the technician thought that he might have messed up my laptop and called for his colleague.

His colleague shut off my laptop and tried with another new stick of 2gb of RAM, the same thing happened. By this time, i actually knew what exactly is the problem, but i decided to just stood back and observed on how they would fix my laptop. i remembered that before i wanted to upgrade my RAM, i have made some research on the compatibility of hardware upgrade for my model of laptop. The motherboard would only allowed to a max of 2gb of RAM. Pfff... i have bought a low level of upgradibility laptop.

Upgradibility?! Is that a word? Hahaha.. i think i just made that freacking word up.

So anyway i offered a solution to the technician,what if they put in a 1gb of RAM. They did just that and hey presto! My laptop works fine. i asked them why is that so? Then the other technician told me that my model is an old one and it would not accept a speed of the RAM that is currently their using. i was like thinking in my head at that time, "Wrong! My laptop is maxed out at 2gb silly.."

So now my laptop has 2gb of RAM, and oh man, everything seems speedy and instantaneous. Previously it would buckle under the workload. i am glad and sad at the same time. Glad that my laptop is work much much better now but sad that, that is the maximum that i could do to upgrade it. i have identify another problem with my laptop. The DVD drive. That thing had a lot of difficulties to track and read DVDs or even CDs that i would thrown at it. Figure of speech okay, not literally "thrown". What are you? Stupid or something?! Hahaha.. i'm kidding.

My next upgrade would be changing the DVD drive to a better one, the one that could read every single optical disc that i could give it.

So my weekend was as boring as counting the stars at night, how was yours?