September 14, 2009
Last Saturday, i was just looking around for some interesting video on YouTube, when i decided to type "Myvi" into the search tab. i was looking for interesting car mod on video, specifically on Perodua Myvi if there is any. Although i have a Special Edition version of Myvi, which is the sportier version of the car, i wanted to look for the personal modification version.

i was just browsing through all the videos that came out of the search. Well honestly though, there aren't any interesting and good ones that i found worth mentioning here.

i stopped at a video where a modded Myvi was blowing fire out of its exhaust system at a roadside eatery, which i felt the person was just really showing off. Its pointless and dangerous. Then as i was about to click on another video, something caught my eye. 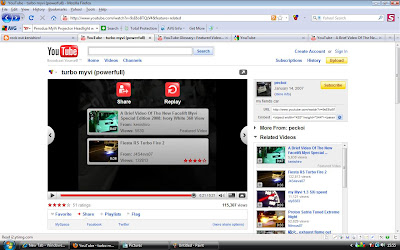 i realized that on the top of the right hand side tab under Related Videos, its my video! It was featured for the day! Of course, i was delighted and.. okay, i was freaking delighted! Because, i would never imagine that my short video would be a featured video for the day.

The fact that i made that video just to point out that, that is the car i wanted to get for my first car and i made a simple and not a fancy video. You know, just a simple video. It got featured! And i was like.. "yeah!" yelling inside my head.

So what does it mean to be a featured video on YouTube? Well i don't know. Just a random pick i guess. Or in Google's word,

Featured Videos will be primarily populated with videos from YouTube's thousands of partners, but might also include select user videos that are currently popular or that we have previously showcased in Spotlight Videos. We will automatically rotate these videos throughout the day to keep them fresh. Featured Videos are not advertisements or paid placements, but do feature content from partners with whom we have a commercial relationship.

So basically it doesn't mean anything rather than just a random pick of the day. Still, it made me feel good. So if you guys haven't seen it, here it is again, the featured video last Saturday.

P/s: if you're reading this from my Facebook notes, you will not see the video. Please click on the "view the original post" to see it.
Car Late Night Personal Achievements rock out rambling Video Weekends