May 16, 2009
i have to say that i can't think of any word that suits my Saturday other than SURREAL. Actually the day started quite fine. i planned to check out an open interview & job expo at Miri Civic Centre organized by the Labour Department. i initially didn't know about it but the day before i had to attend our union meeting at the nearby Pustaka Miri.

The fact that Pustaka Miri have a very limited parking space so i decided to park all the way at Miri Civic Centre famously known as Dewan Suarah. So the evening of Friday i parked my car at Dewan Suarah car park which are many and empty. i walked all the way to Pustaka Miri to attend our union meeting.

So when we're finished with our meeting about an hour and a half later, i realized there a few banner put up at the Dewan Suarah about the one day job expo upon walking back to get my car. i decided to check it the next day.

So the day that the incident happened.

i actually woke up late this morning, even though the night before i went to sleep early. i got to the Dewan Suarah about 1030am. There i met with three of my colleagues, one of which i've made a date with to check out what's the job expo is all about.

The main objective about going there for me is just to view if there are any option left for me besides the job i'm currently occupied with. i actually made a date with her only but she decided to drag along two of our colleagues from another branch to check it out.

Labour Department actually had just revamped their website to cater the need of job seekers for other job opportunities beside going to a government department. The website itself looked better than the previous that i've used. It looked more decent in presentation and user friendliness.

As perhaps if you're a Malaysian reader, you've probably seen our government official websites, webpages, or web portals. Most looks like they were made by amateurs. In simple words: Pathetics. Yes, i'm sorry for being so harsh. Seriously just pay the person/group that made the websites more man, probably they'll have the motivation to make our government official site look more sophisticated and modern. Unlike now, there's always dead links, crappy flash animations, freakingly annoying popups, and inconvenient menus/submenus. Not to mention the hard navigations. 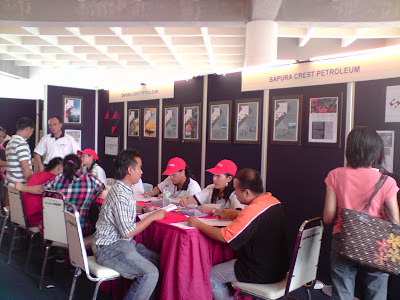 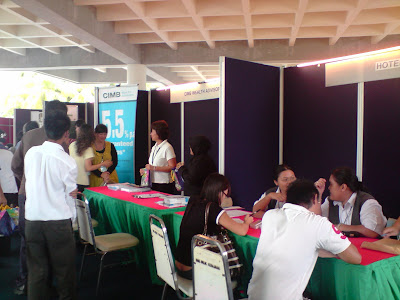 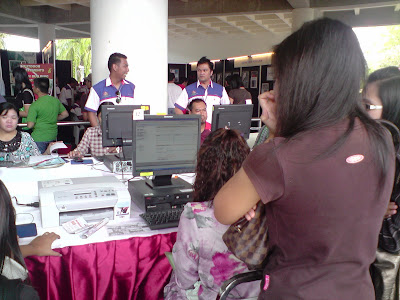 My colleagues, the three girls on right side. 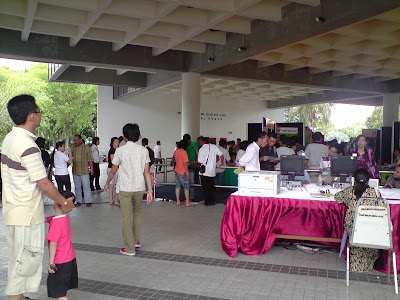 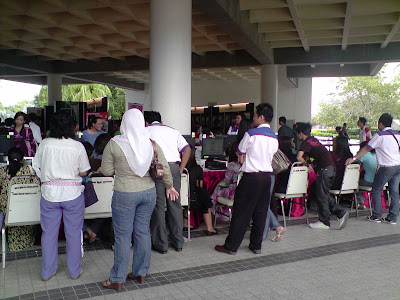 People gathering at the computer kiosk.

After about 10 minutes of serious thinking and recollecting, i remembered about 9 years ago, way way back in 2001, i've registered my personal detail at the Labour office back when i was still jobless. WoW! i was quite dumbfounded with this experience. The fact it has been closed to 9 years ago and still my record is there intact although it's some of it is outdated, 9 years ago.. duuh!

Now after that, my colleagues continued to key in their particulars. Then later when each of us have finish up with our entries, i persuade them to go and grab a bite at nearby kopitiam, which is Kaya & Toast.

My colleagues from the other branch lead the way but she chose to drive the other direction and using the loong way around. i was laughing while driving all the way. Why she decided to go all the way around was beyond me. She lead the way because she was the first one out. i was last to go out from the parking space.

As we approached to the intened place, the one that i actually wanted to go checkout the expo with, overtook the lead. She signalled to turn left but unfortunately a motorcyclist behind her car maybe was still going fast and didn't see the signal and went straight into her car. Luckily that motorcyclist guy managed to break early and minimised his unfortunate and inescapable collision with my colleague's car.

i was right behind her during the accident. i was relieved that it was nothing too serious, just that the motorcyclist guy was fast to react and breaks early and knocked slightly into my colleague's car. It could be a lot serious if he was riding a little more faster.

It was surreal as i watched the whole incident. As all the four of us stopped, i went straight to her to check if she's okay. The man was visibly shaken but coorperative. He gave his contact number and the place where his working; he was about to go there. The negotiation went smoothly, and thank god he didn't make it difficult. i think he was feeling guilty for following my colleague's car too close and got himself into the accident. 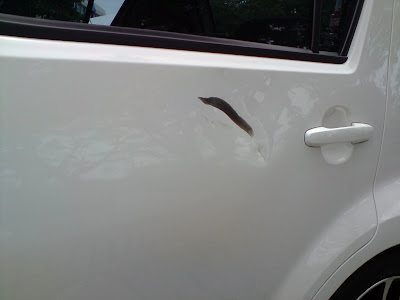 The dent at left side passenger door. 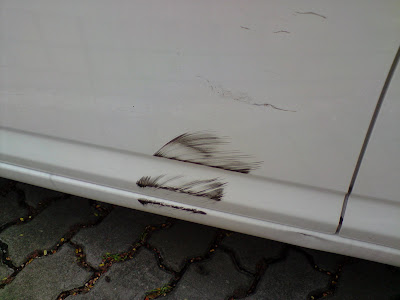 The dent at left side front passenger door. 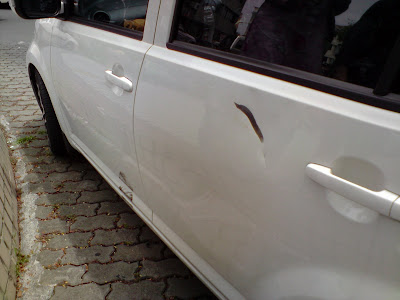 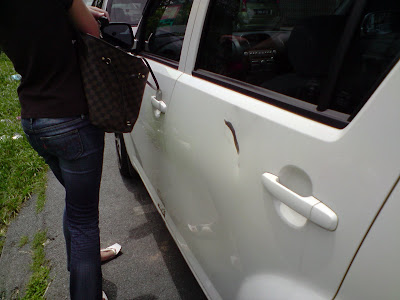 
i could clearly see my teary colleague was fairly calm but clear upset that her car got hit. It is still quite new, not even a year old. i comforted her and told her to contact her brother. It was strange day for all the four of us, as this accident ruined what is to be a great relaxing hangout Saturday.
Car Crappy Day Laptop rock out rambling Weekends