May 03, 2009
Actually i had a few plans for this Labour Day. Such as go to watch Wolverine, wash my car & hang out to forget my work pressures. But, like always i didn't manage to do all of it. It's not usual that we had a three day weekend throughout the year, so i wanted to make the most of it.

Friday.
i decided that i would have a laid back Friday and just stayed at home, in which i did. Later in the afternoon a friend invited me to join her to a bite at Secret Recipe here in Miri. Seriously, i never been there even when the place was open since last year.

The thing about that location is, that it will be so hard to get a parking space especially when going out for Friday nights. The fact that there's a couple of nightclubs nearby make the parking spaces constantly full.

So my friend invited me to go there around 7pm. As i predicted, when i went there to look for parking space; it was hard to find one. Luckily for me as i went for a second round to look, a car happens to leave out a space right in front of Secret Recipe itself. Now that's a lucky find. 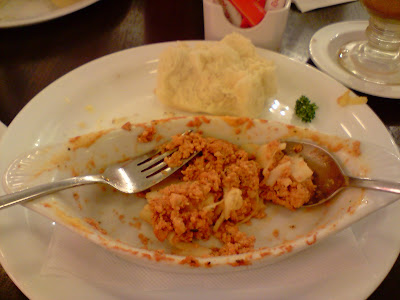 i wasn't sure what to eat though, because i've never been there and i not sure whether the food is up to my taste or not. No.. i'm not saying that i have high standard of taste just that i'm not used to eat western style food. Just that.

i just decided to order the same with what my friend's having, Chicken Lasagna with Cafe Mocha for my drink. i, honestly had a great time, even though i haven't seen her for almost 4 years now probably. The food was also great. Initially i was skeptic that it would be enough for me, but after finishing it, i was satisfied. i'm looking forward to dine there again.

Saturday.
Saturday was not good to me. Morning i decided to drop by the office to do some work. After that i decided to look for a set of guitar strings at music store down town. Unfortunately after a few times looking for parking space that seems to never materialize, i decided to go home instead.

Who to be blame? It was the end of the month, the time of salary payout. Everyone in Miri seems to go out for the weekend. The parking spaces all around town was full, some even consorted to park where ever they can fit their car in.

Upon returning home, i took a nap. Waking up from that i felt my body hotter than usual. The day itself was hot and being in the sun all day, it was not strange to find oneself caught a fever from it.

Sunday.
i woke up feeling really hot. My head felt like burning. My throat was dry and sore. i felt my body ache all over and topped off with a flu. i really hate it when i woke up with a fever. Well that's what you'll get when going out in the sun without any protection. i should've where a cap or something.

As it has been a long time since i've been out and about in the sun. For now i'm working in a closed air-conditioned office, my body surely got a shock from the harshness of the sun's heat.

So for the whole day, right from the morning until now, i'm headache seems not going to subside anytime soon. No, i have yet to take any medicine. i hate medicine. i'll probably just take more vitamin Cs and multi vitamins before i'm off to sleep.

There goes my plan to watch Wolverine this weekend. Damn flu!