January 29, 2009
i am recently hooked onto Starbucks' coffee. i have yet to try all of them, although i don't think i would ever do that. How i got hooked onto it was a pretty lame and boring story. Yes, i know nobody wants to hear it, but i'm telling it anyways.

So a couple of weeks ago, while waiting for my parents at the Miri airport who were coming back home from Kuching after sending my younger brother to his college, i decided to try Starbucks. i don't actually know when they set up there as previously it was a Nescafe little coffee corner.

My fave cup of espresso coffee have always two:

So being a newbie i just place an order for a cafe mocha, without ever know what the price would be. i was shocked to find out that they gave me the largest cup, which they called Venti, but surprisingly a good cup of coffee or to be exact, a cup of cafe mocha, to go of course; i was in a hurry.

i took several brochures home and realised that i can customised and make my own drink. Well after that the rest is history. Today i bought a cup plus chocolate donuts/doughnuts/bagel?! after work. Damn that coffee is so pricey, RM15. Perhaps i should open my own specialized coffee shop, i might make a lot of money from it.. Not!

Anyway, now here's my "custom" cafe mocha would be: 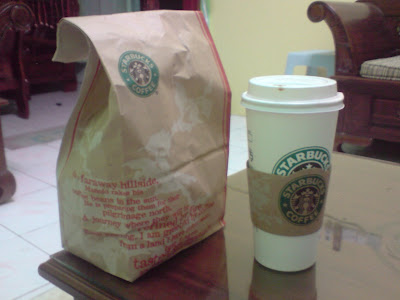