September 07, 2008
It has been raining every day for the past week now here in Miri, Sarawak. i can safely say that sunny day is sorely missed right now. Like the last three days, the only time it was sunny, was a few hours in the morning, before clouds carrying rain would take over and spilled its contents onto the world below.

Probably the most affected during time like these are the poorly dry clothes. It took two days for the clothes to dry though not completely as some of thems are still damped. Somehow these current wet and rainy days does not only occured here in Miri, but also all over the country.

Rainy seasons perhaps? The weather system nowadays have gone haywire isn't it? i remembered back when i was still in primary school, the rainy seasons don't usually occured until end of September. Perhaps i am wrong, i don't know..hah..

Anyways, for the past couple of days these weekends, i've installed and played Heroes of Might and Magic 4. Why? Because i can't install the Heroes 5 into my Vista laptop, i can only installed it into our family desktop computer. Of course i'm no longer using that desktop computer after i got my own laptop. So i have to make do with Heroes 3 & 4.

After done much researched on the web, i realised that, Heroes 5 has some compatibility problems with Vista. Though i've done this researched a while back. Maybe i should try the two lastest version of Heroes 5, the Hammers Of Fate and the Tribes Of The East. Hopefully i can play those, if not, then it would be just a waste of money.

So again anyway, while i was installing Heroes 4 i was amused by the warnings given the installation setup. Enjoy, hopefully some of you would get this joke..

Click on the picture to see the full size, you won't regret it..haha.. 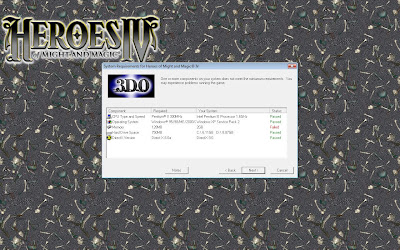 i got 2GB of RAM but i failed the minimum requirement?! WTF?! 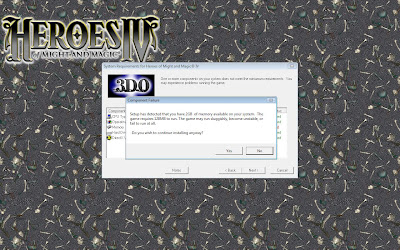 These are the problem i might encounter?! Nope not a single glitch..yet..haha hopefully not..
Late Night rock out rambling Weekends